Let's start with a philosophical question: What is someone's first astro photo? Any photo that shows a celestial object? That could be any photo that shows the moon or even any photo including the sun. Or is it a photo that shows a portion of the night sky? Solar photography does not and still is a part of astro photography. Well, I'd say it is a personal and emotional selection, the one that feels like or was intended to be an astro photo is one. In my case I collected some information about stacking images and calibration frames and downloaded Deep Sky Stacker and then took my tripod an my prime lenses and drove to a dark place. It was quite dark actually and spooky because all of a sudden there was a noise. It was somehow mechanical and came closer quickly. I barely succeeded in turning my torch on as the stupid and probably drunken bicycle driver almost crashed into my tripod. He did not even respond to my clear advice that turning the light on might save him and others from trouble. For safety reasons I drove to a slightly brighter place where I could put the tripod on a field and not on the road. When I got home I fed the images and calibration frames into Deep Sky Stacker.
Ladies and gentlemen, here you see the constellation of Orion: (Click for full screen view) 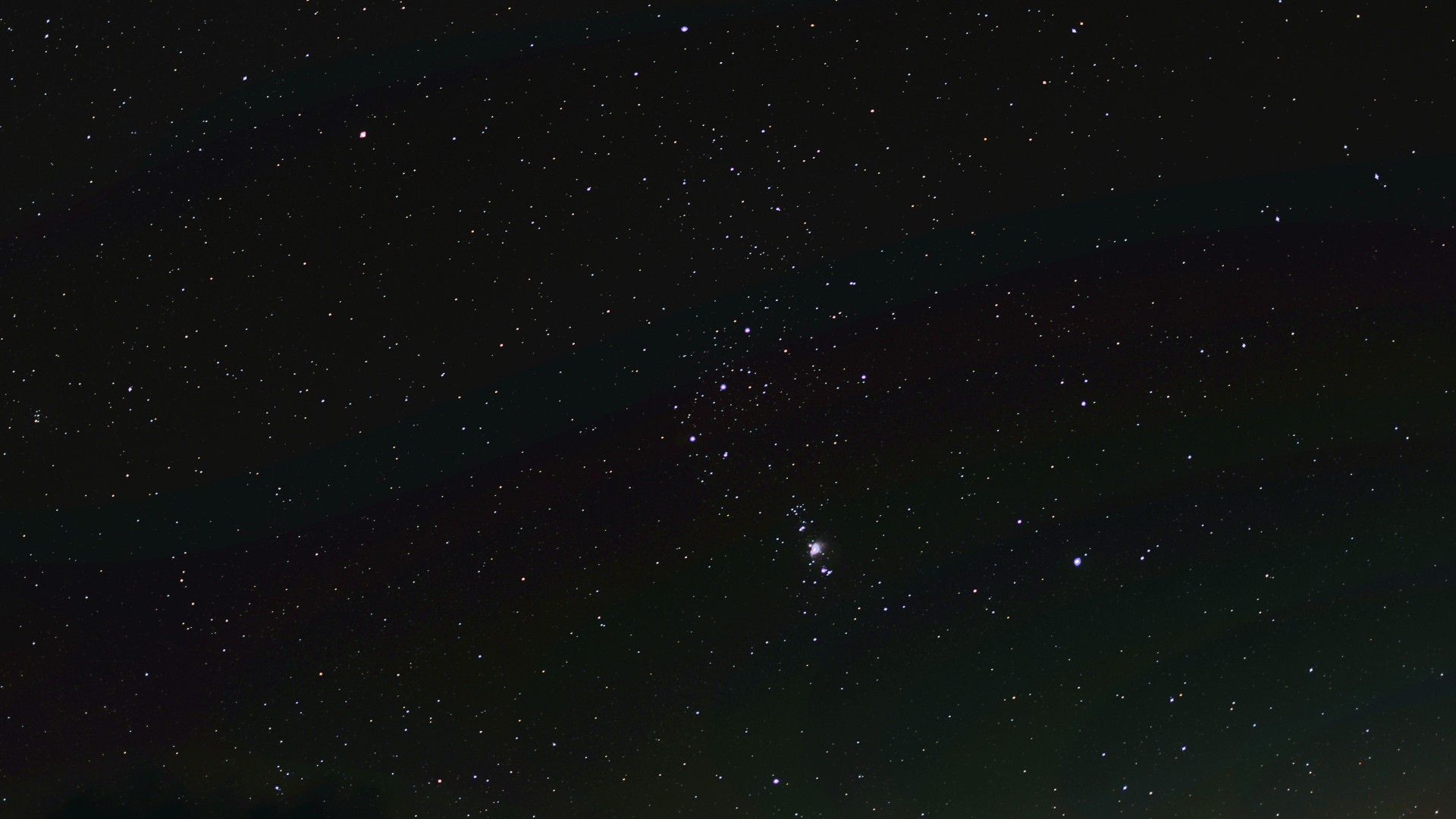 Well, to me a single shot without the calibration frames and Deep Sky Stacker did not look much different. I took another attempt at home, shooting through a roof window. Today I know that you must never do that because window glass can significantly degrade the image and cause refection. Shooting next to houses is not a good idea either because warm air is rising from houses causing bad seeing. I took far more subs and used a longer focal length: 90mm, the best prime I have: 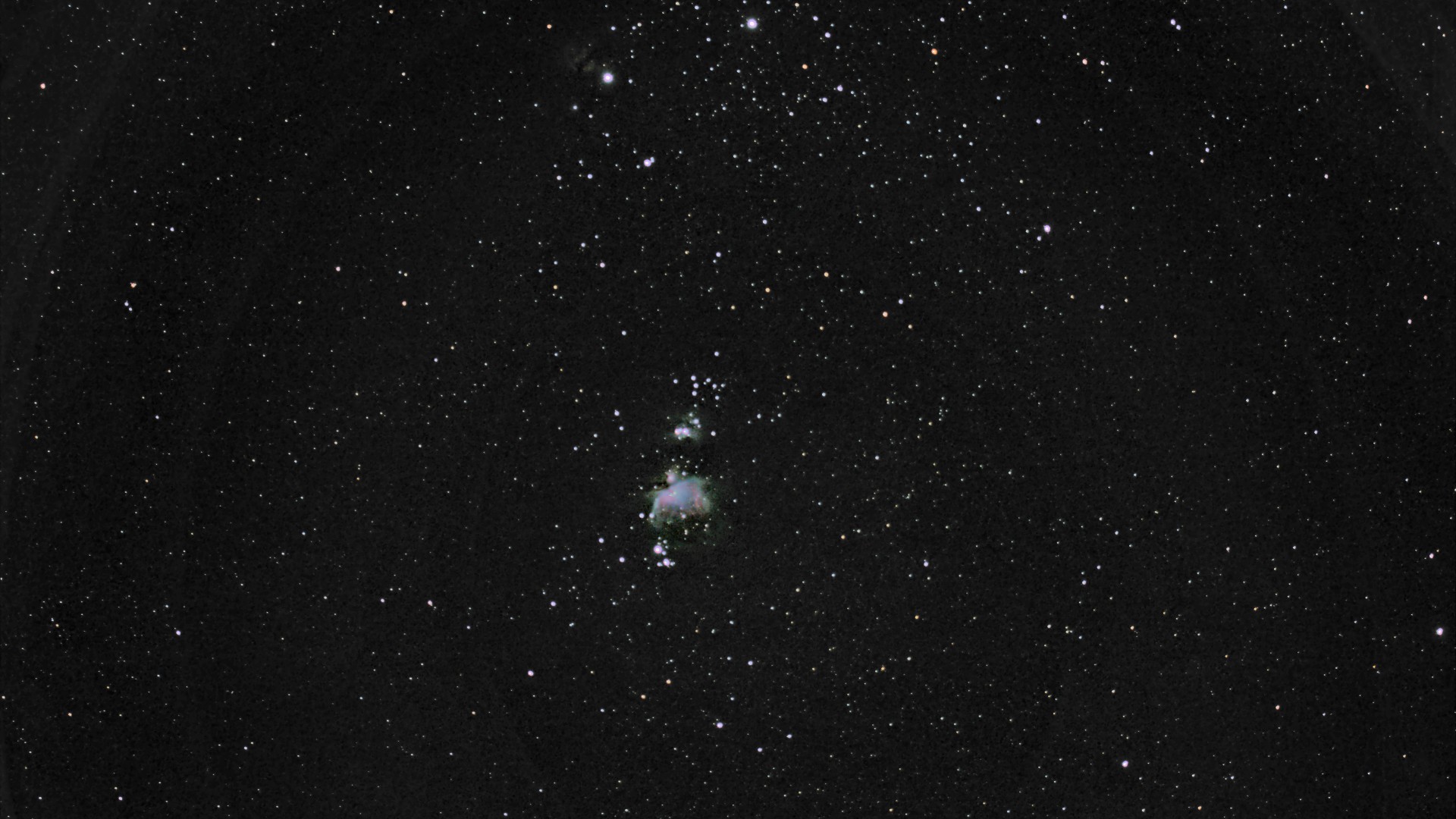 Wooohooo! The red and green bat in the center is the Great Orion nebula. The blurry white spot next to it is the running man and on close inspection you even see the flame nebula next to Alnitak, the left star in Orion's belt. I felt I was interested in the topic but the image is not that mind blowing. Probably better gear is needed. That was in December 2016. So I started my research. I got myself a "Select and understand your first telescope" book, studied many websites, phoned two major online shops' hot lines and invested about 2.5k Eur in my first imaging rig: a GSO RC6 on a Celestron AVX and three eye pieces for visual. From today's perspective (2019) I must say the shop guy fooled me. It all comes down to the old principle of someone just wants your money and is not interested in what you want. Anyway, this was the start and here is what I feel is my "first REAL astro photo" because it was taken with a telescope on a mount: 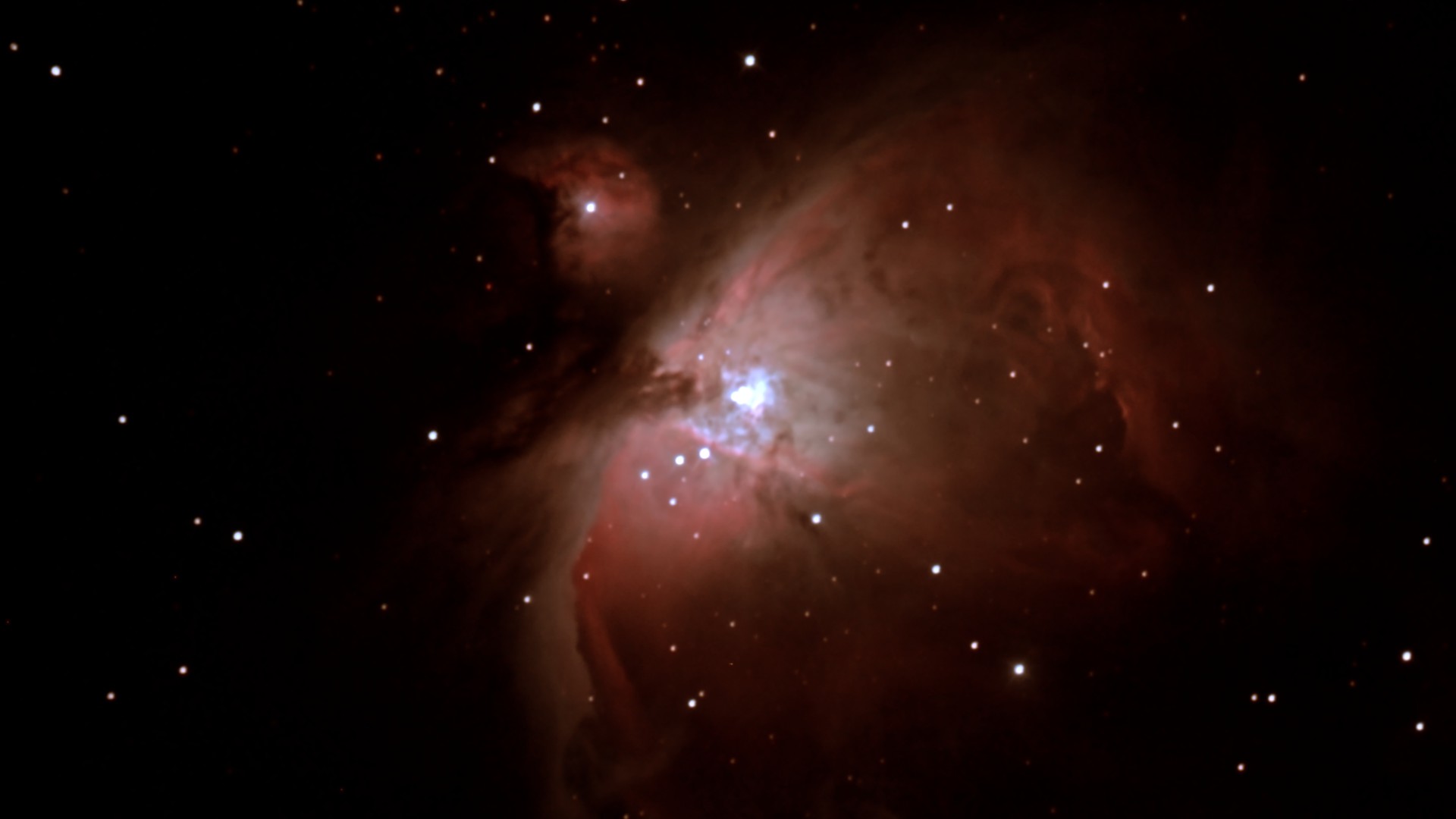 As I know now stars do not look like bullet holes. It needs some care to keep them in shape when processing. Here is the same image reprocessed one year later with a dedicated astronomy software and a bit more experience: 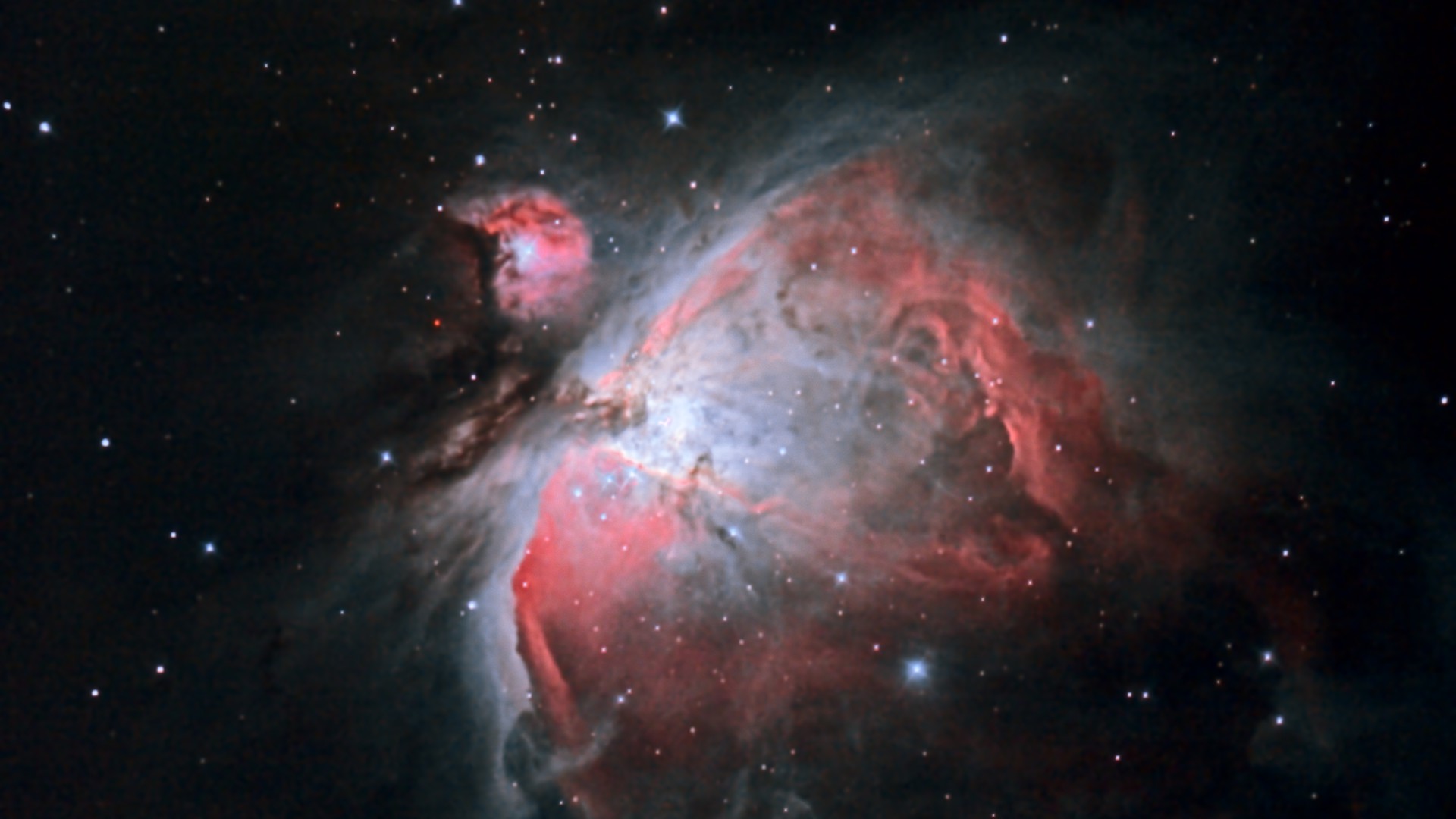 As always the internet is full of images of anything, including this object. It feels good to find lots of them that look far worse than your own work and it causes some pain to see what the pros' images look like. I have a tendency for perfection that I'm trying to get rid of, so I stopped comparing my images to the Hubble Space Telescope. They are cheating, not imaging through the atmosphere. And so do all the astronomers on mountains. Still I found better images taken under the same poor circumstances that I have in crowded central Europe. The considerate reader might be missing the auto guider in the above gear list. True. Auto guiding helps a lot. Furthermore the focal length is too large, too large for the mount and too large for my seeing. Oversampling was once a magic word when CD players came to market, but when imaging oversampling does not help at all. The first piece of gear that improves the image is the auto guider, the second one is called a focal reducer: 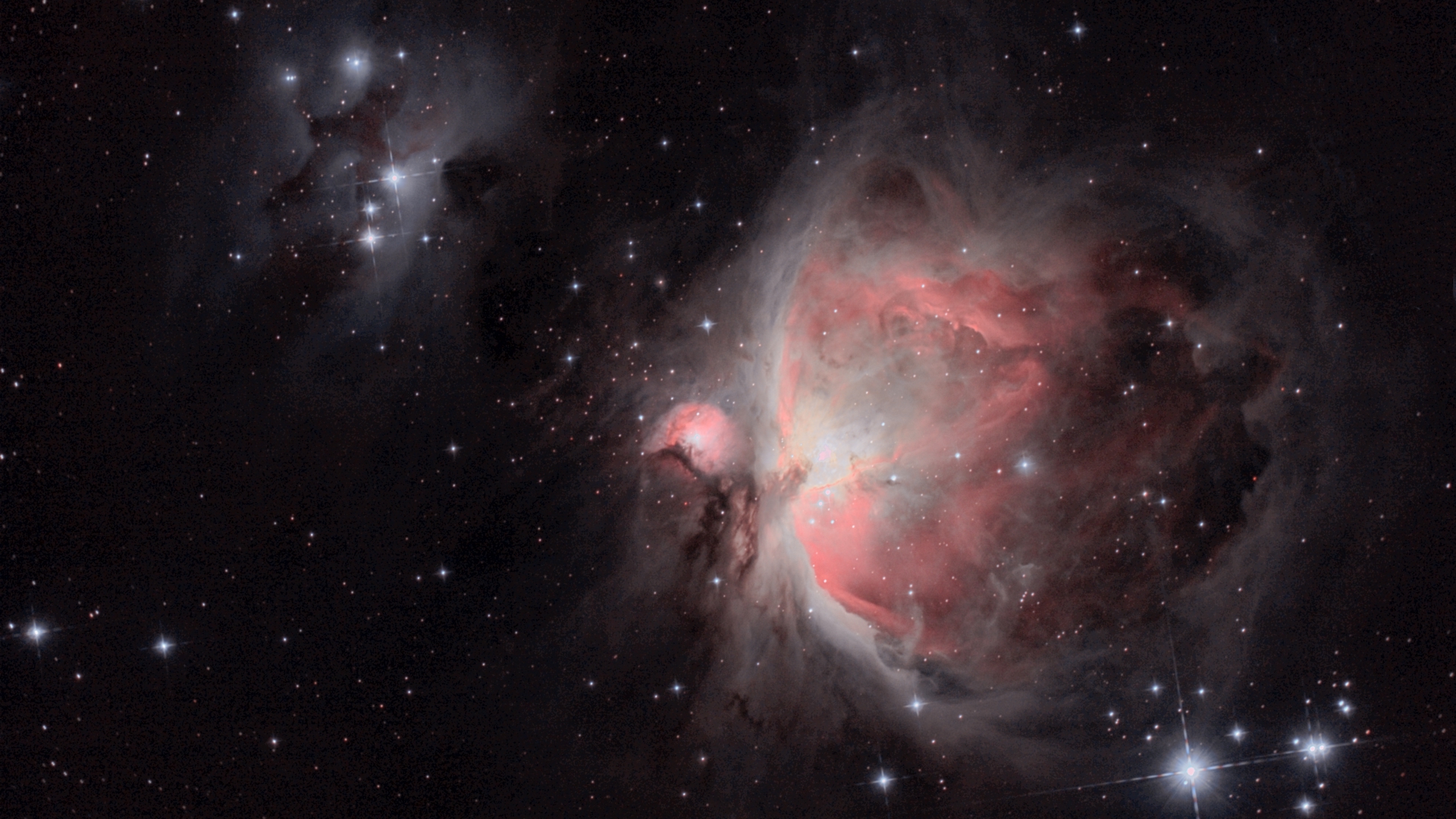 This is exactly 1 year and 15 days after the first image. After that I learned that guiding with a guide scope does not work for the scope because it's primary mirror is moving. Off axis guiding was the cure. Meanwhile, after one more year, I have sold all the initial gear and invested in better hardware. Now I have a bigger mount and two cameras and two telescopes. I enjoy this hobby very much and I do not regret a single cent or a single minute. The only thing I do regret is that I did not invest a bit more in the first mount. If someone tells you to invest as much as you can in the mount: that's true.

Update: Jan. 2020, 3 years after the first image, this time with a shorter focal length and a new camera: 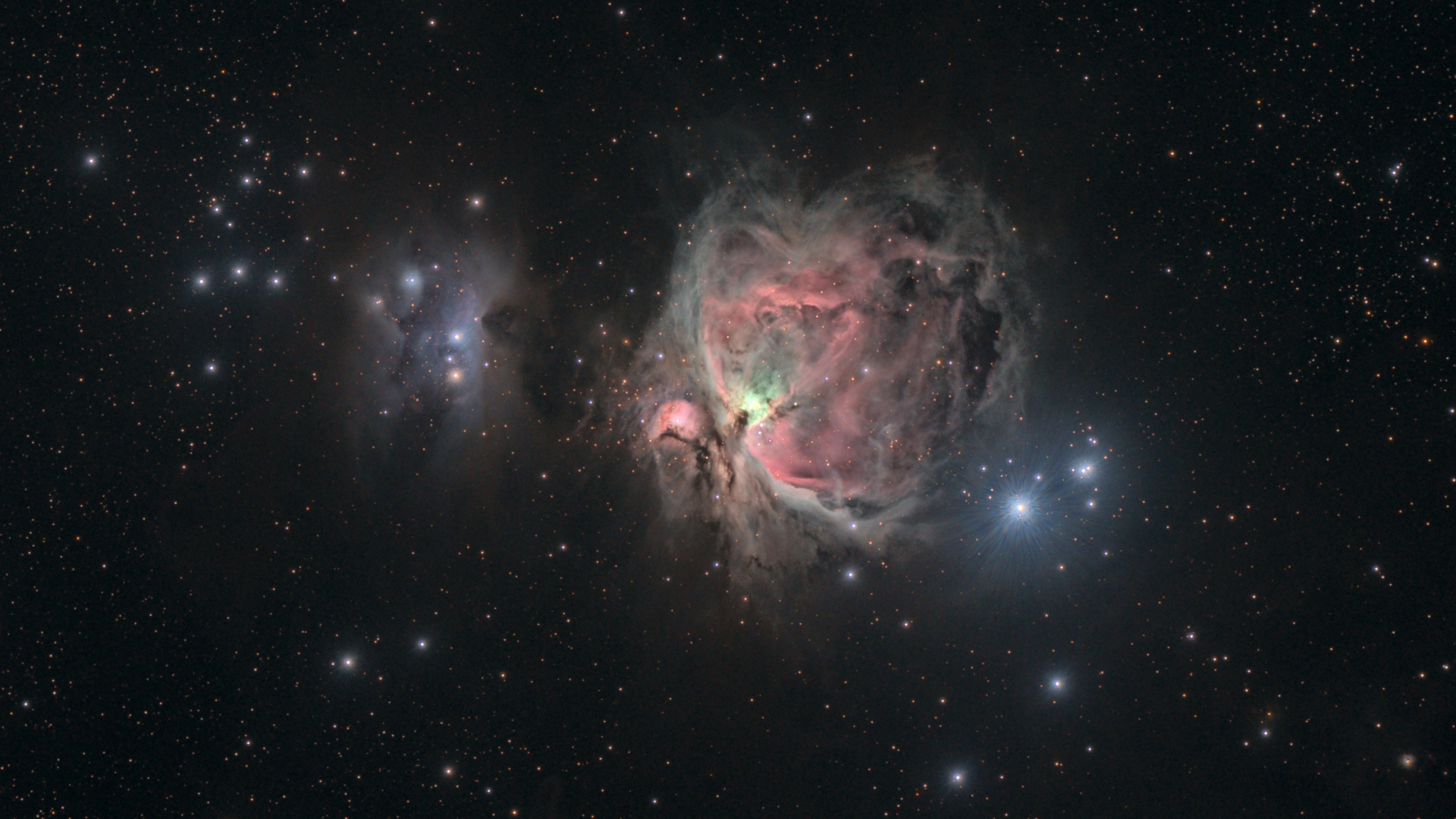 Thanks for reading!
Back to Media