Beginner's Astrophotography: Can I use my unmodified DSLR?

It is often recommended to modify DSLRs for deep sky photography. It may be one of the first topics a beginner comes across and sometimes the recommendation sounds like modding is an absolute necessity. There are good reasons not to do it, for example the camera is used for daytime photography as well or the budget does not allow either to have an existing camera modified or get a modified one. I don't want to go deeper into it. I'm also not opposing to modified cameras. I just would like to show what can be done with an unmodded relatively low priced DSLR if modding is not an option. All images have been taken from Germany under Bortle 4-5 skies from my backyard with an unmodified Canon T3i or T7i. Theses are sold under the name 600D and 800D respectively in Europe.

Any object in close proximity to our home planet is a pure broadband object. Our natural satellite the moon is one and it can be imaged with a telephoto lens from a static tripod. 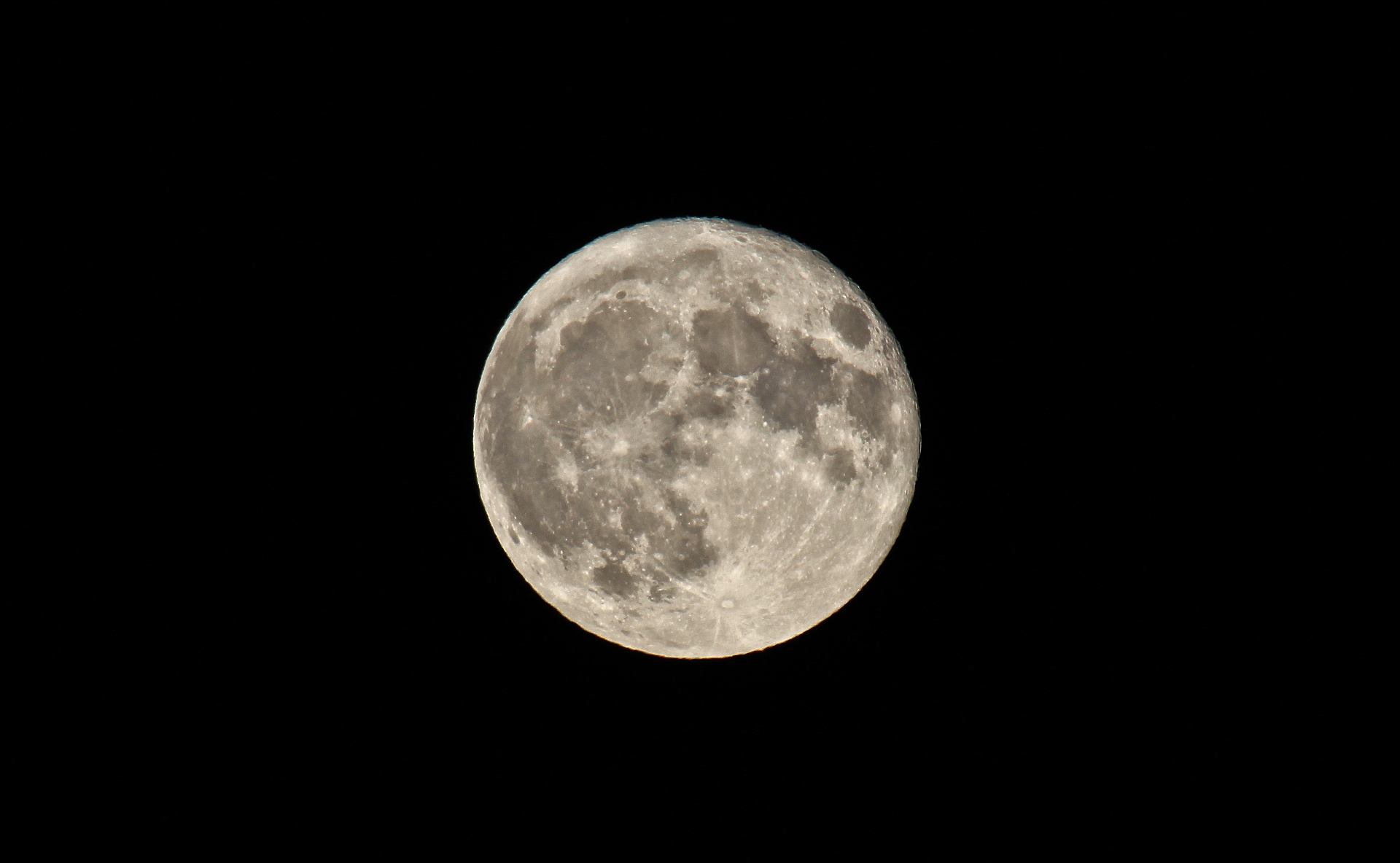 The Moon. Canon T3i, Sigma 50-500 at f/8, 1/80sec, ISO 100, single image
open image
Taking a photo of the international space station is demanding and requires a long focal length, much longer than what was to my disposal. A modified camera however is neither required nor beneficial. 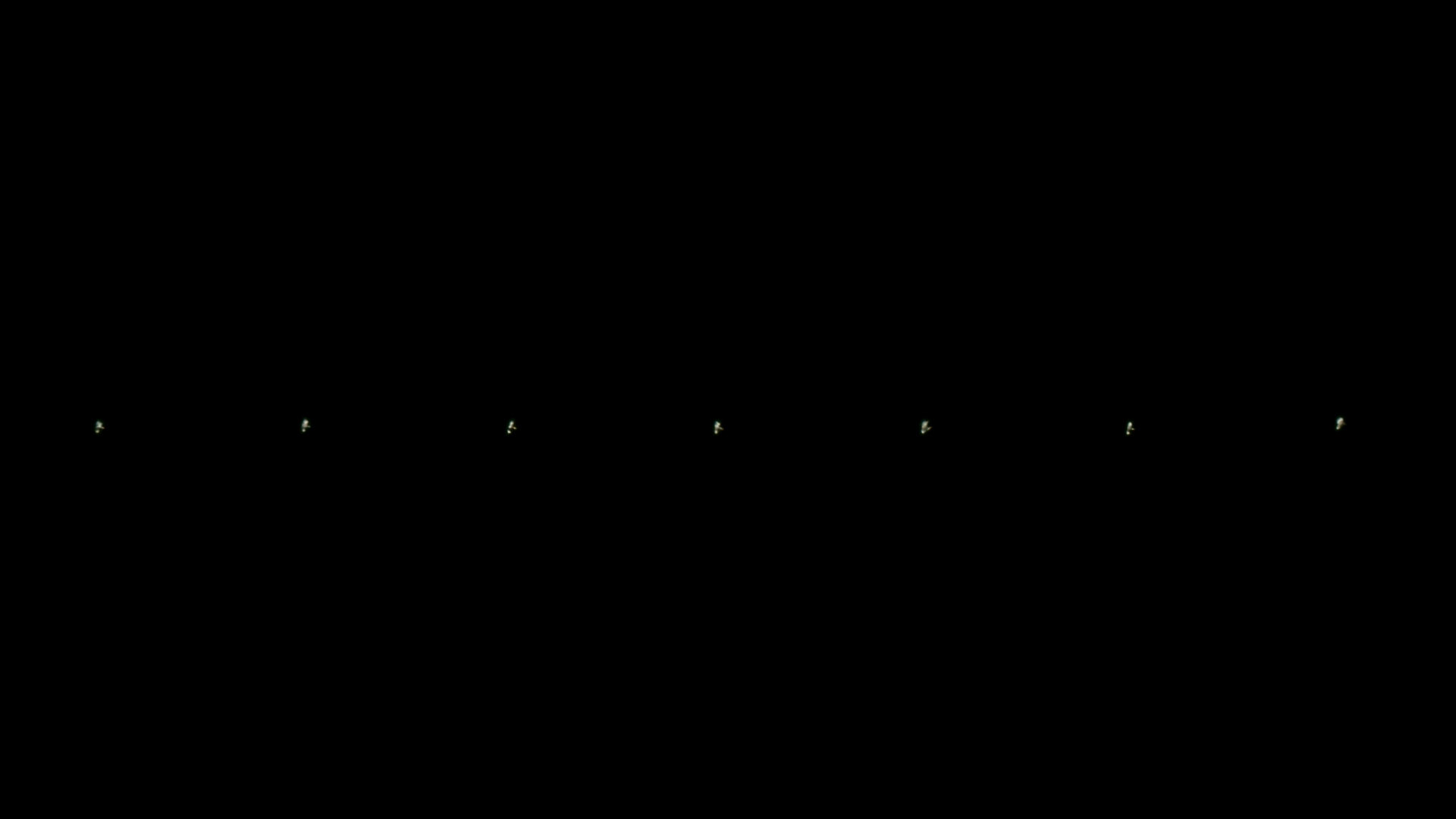 ISS. Canon T7i, GSO RC8 at f/6, 1/2000sec, ISO 400, 7 images
open image
Comets light up and develop the fantastic tails when they are close to our sun. They too do not benefit from a modification. 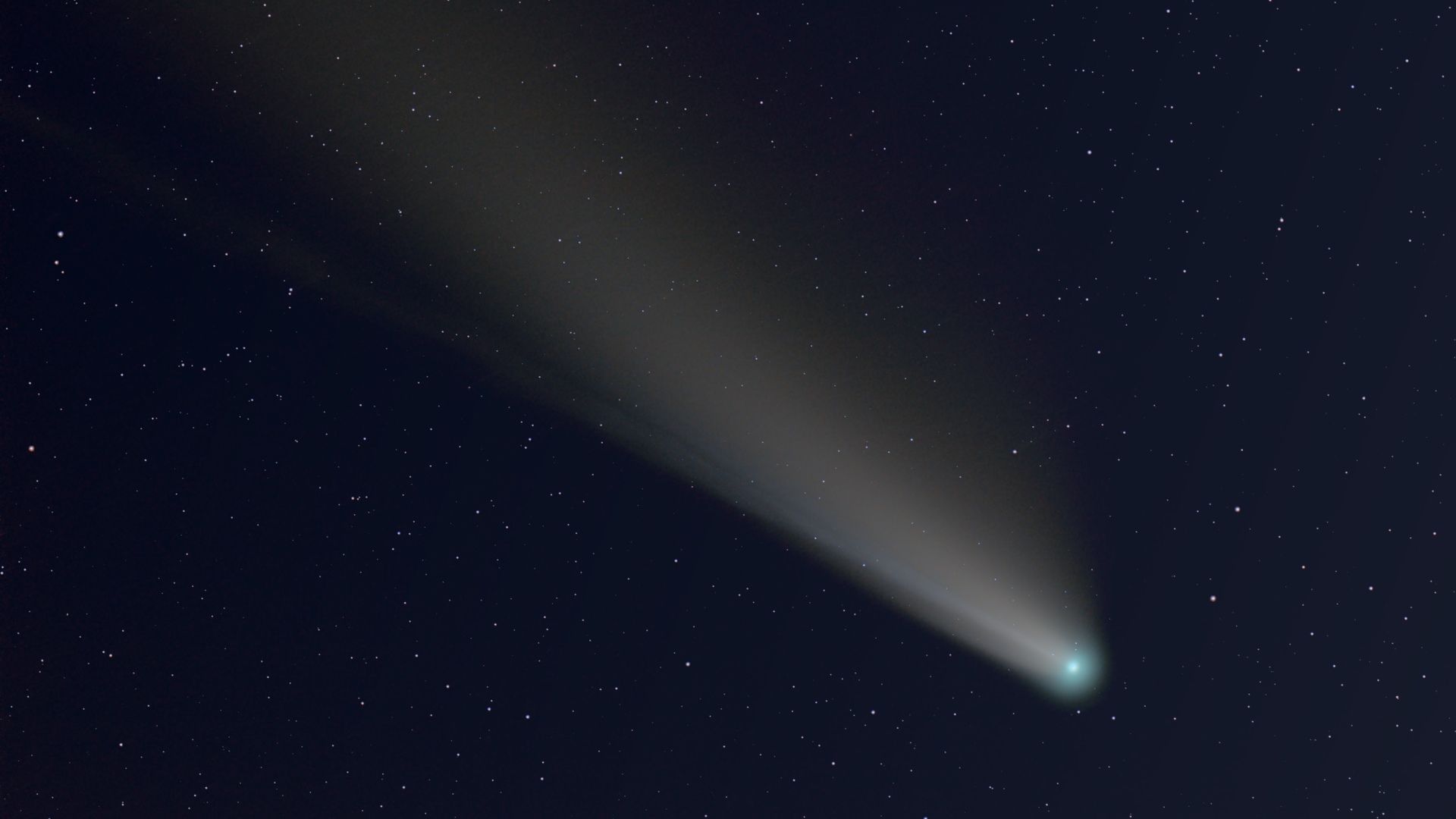 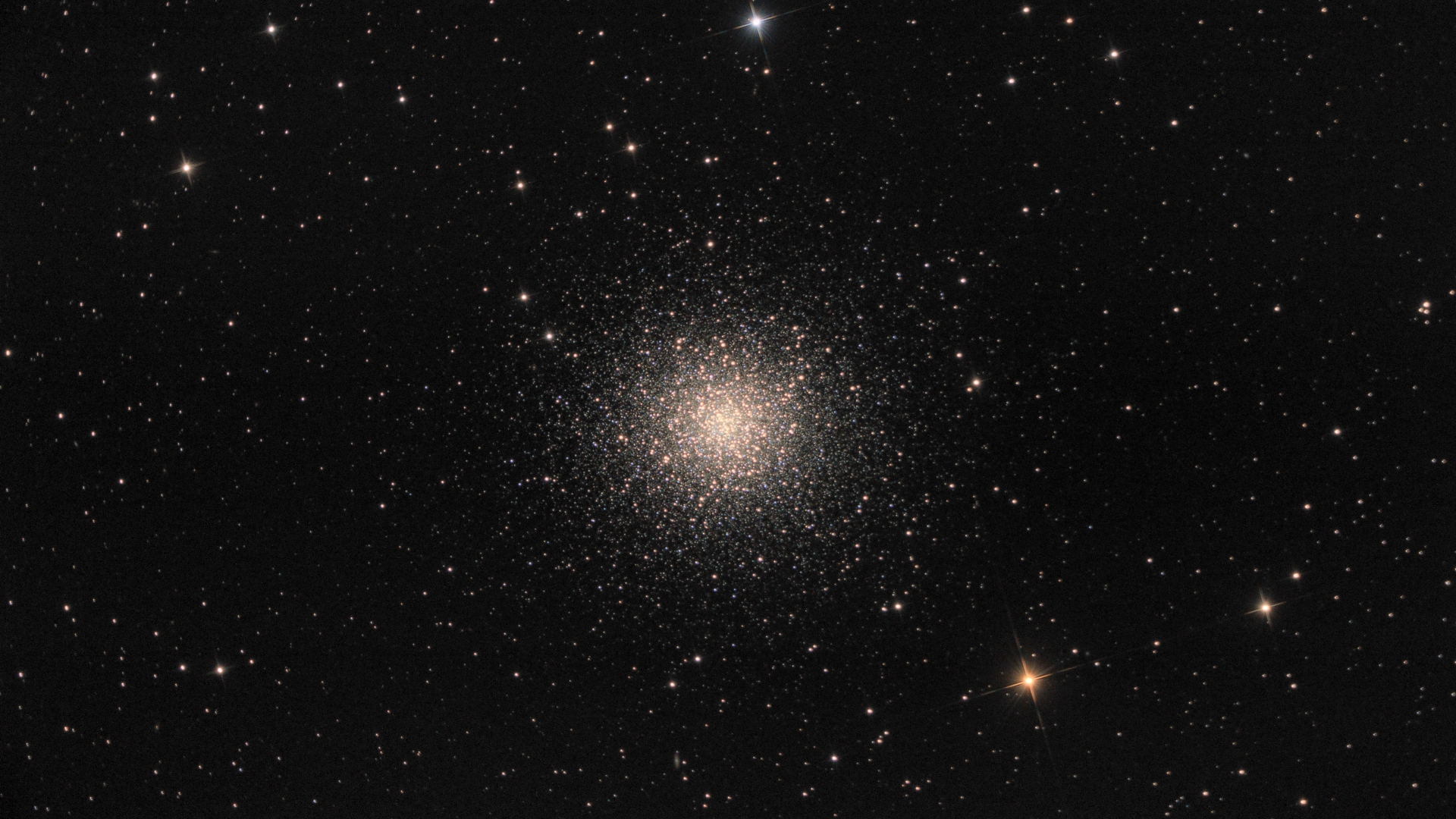 M13. Canon T3i, GSO RC8 at f/6, 29x2min, ISO 800
open image
Some open clusters are located in hydrogen clouds and make the cloud glow red. We will see this in a bit. Others are not. The famous Pleiades reside in a blue reflection nebula that does not benefit from a modification either. 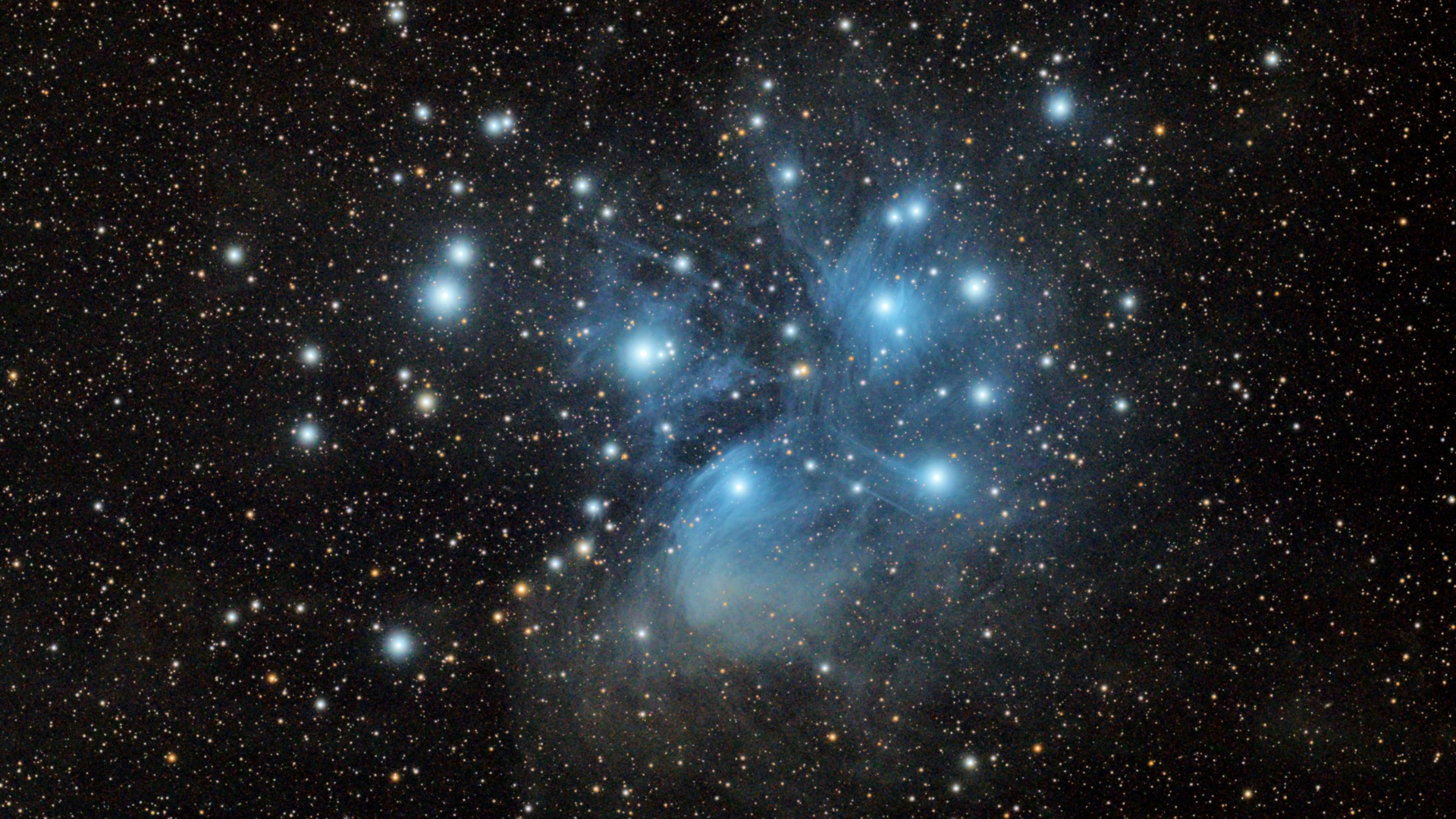 M45. Canon T7i, TS 65mm Imaging Star, f/6.5, 19x4min, ISO 400
open image
The Double Cluster in Perseus comes without any nebulosity and little variation in star color. Still many regard it as one of the most beautiful sights in our night sky. 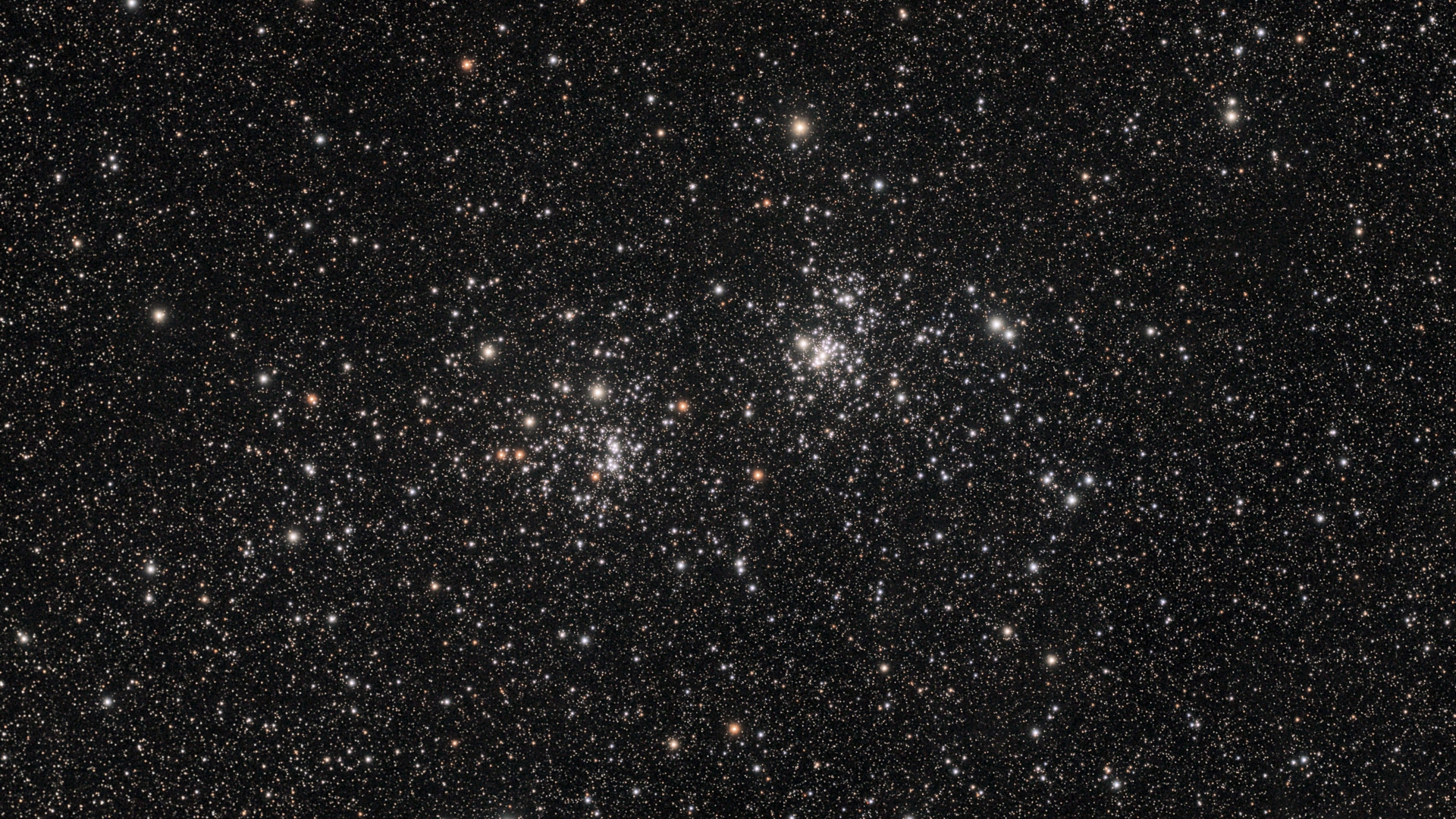 Galaxies consist of stars mainly but galaxies also have star forming regions that typically show strong Ha emissions. In some cases the galaxies are so far away that it is impossible to resolve such small regions from earth. For example all the galaxies in the Coma Cluster will probably have Ha regions but we cannot resolve them. 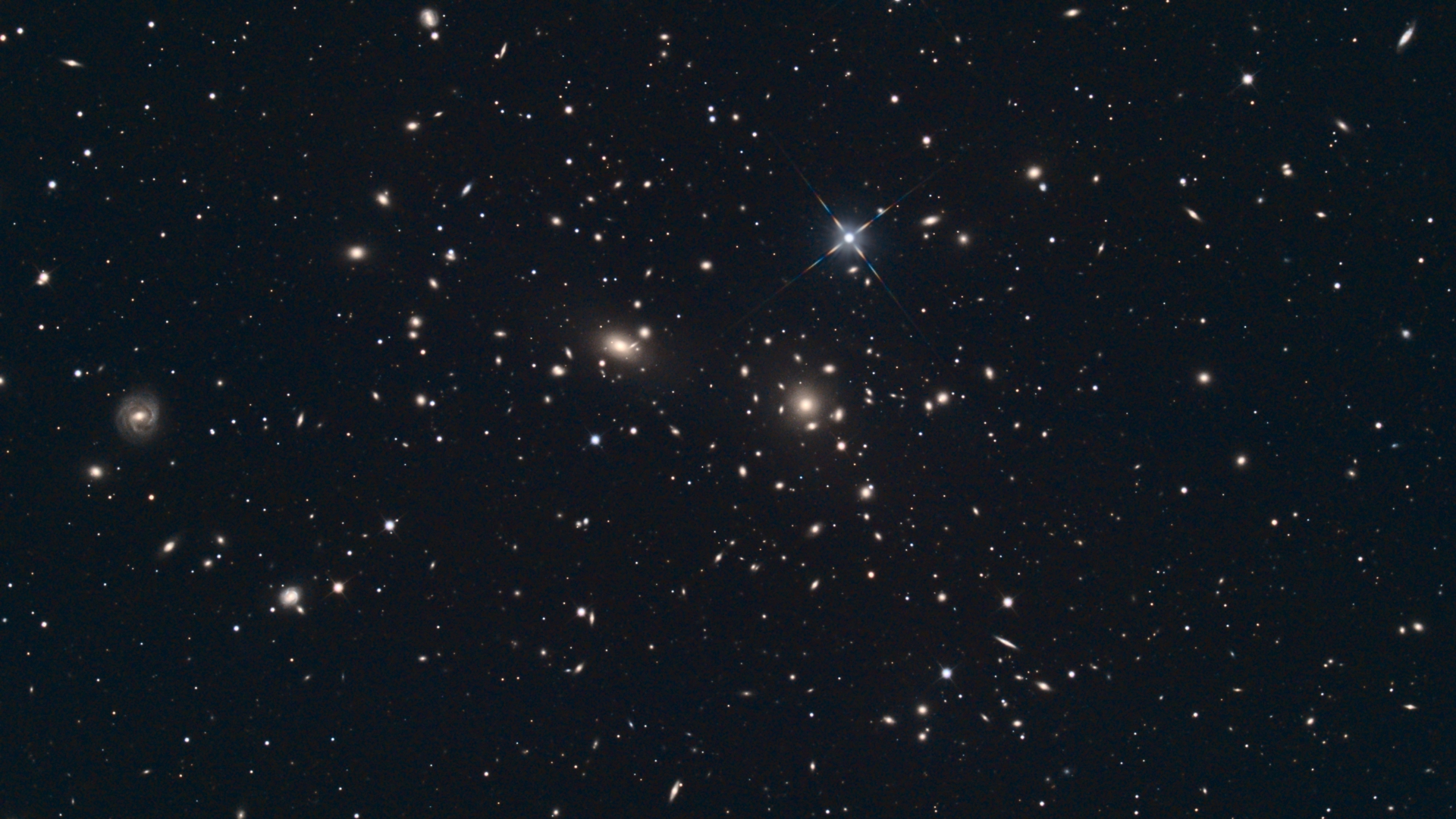 The Coma Cluster. Canon T7i, GSO RC8 at f/6, 158x5min, ISO 400
open image
If a galaxy is nearby the Ha regions can be resolved. They show up as pink dots in the spiral arms. When imaged with an unmodified camera these dots are blue. This does not necessarily ruin the image. Galaxies often show plenty of color in broadband. The stars near the center are the oldest. Only if a star burns at low temperatures it can become old thus the center is often a yellow or golden color. New stars are formed in the spiral arms in areas of high density. Many of them burn hot which gives the spiral arms a blue color. Between the stars there is interstellar dust that shows up as brown clouds. So even without the Ha regions the images do not suffer from lack of color. 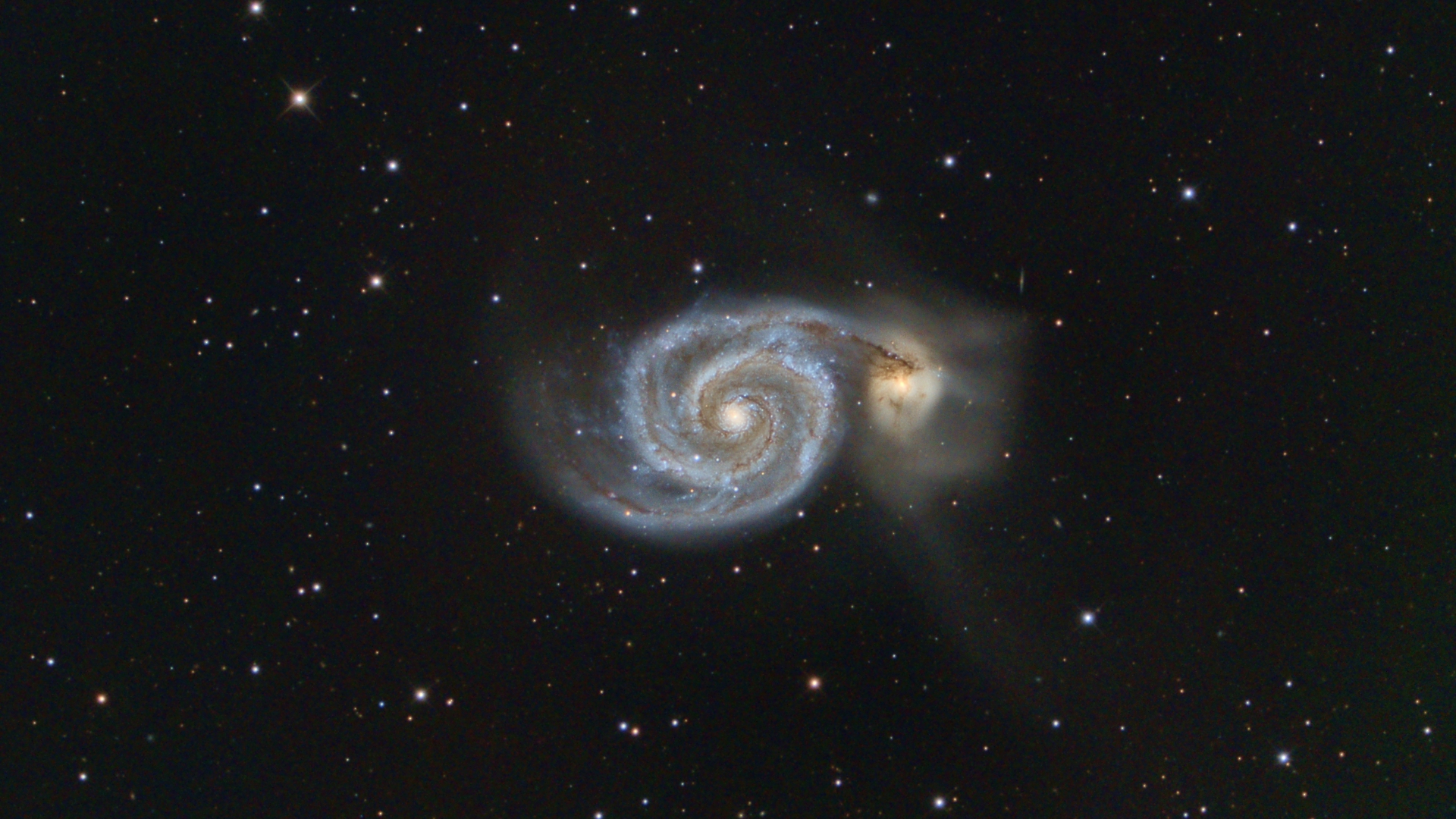 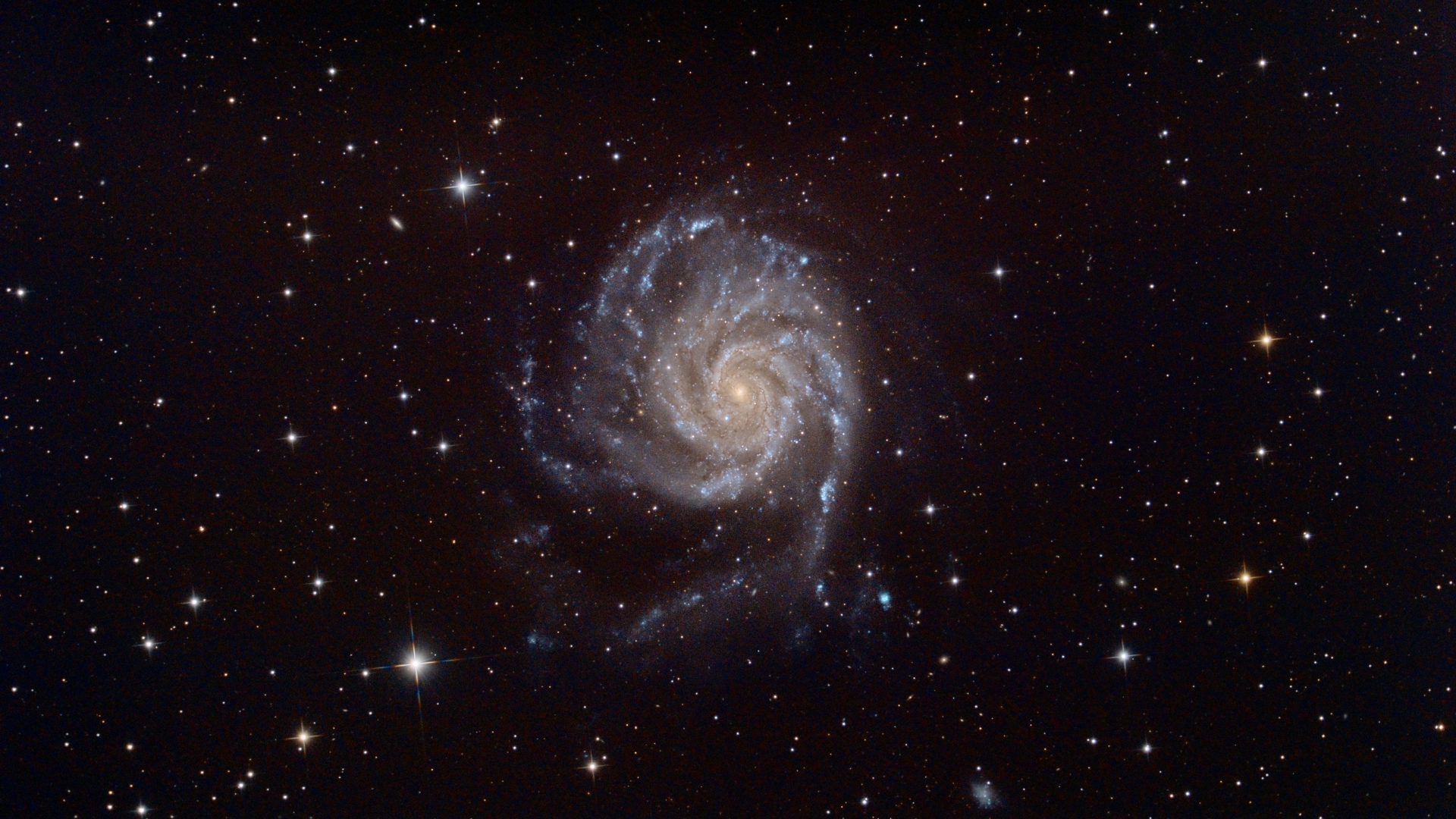 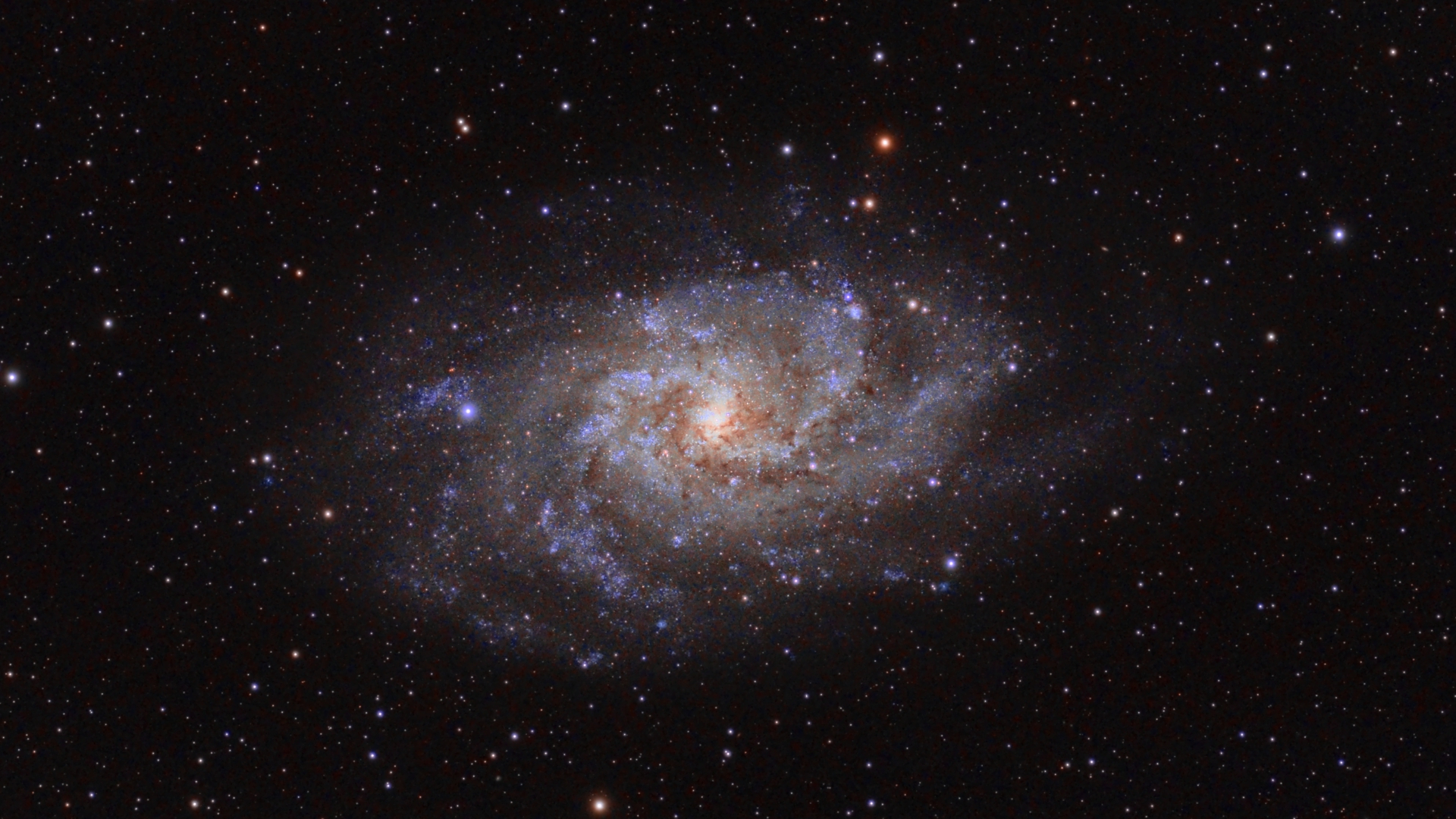 The emission line of double ionized oxygen is a blueish green or teal color. It can be picked up easily by any unmodded camera. Many emission objects are so dim that only a cooled astro camera can pick up the faint signal. But there are brighter objects. Often objects emit Ha and O-III. With an unmodded camera only little of the Ha is picked up. Unlike galaxies with only tiny parts of Ha now larger parts may be missing in the image. Does that mean you must not image it? When the central star in the Ring nebula in Lyra shows up you can be proud of what you have achieved in terms of good focus and good guiding. 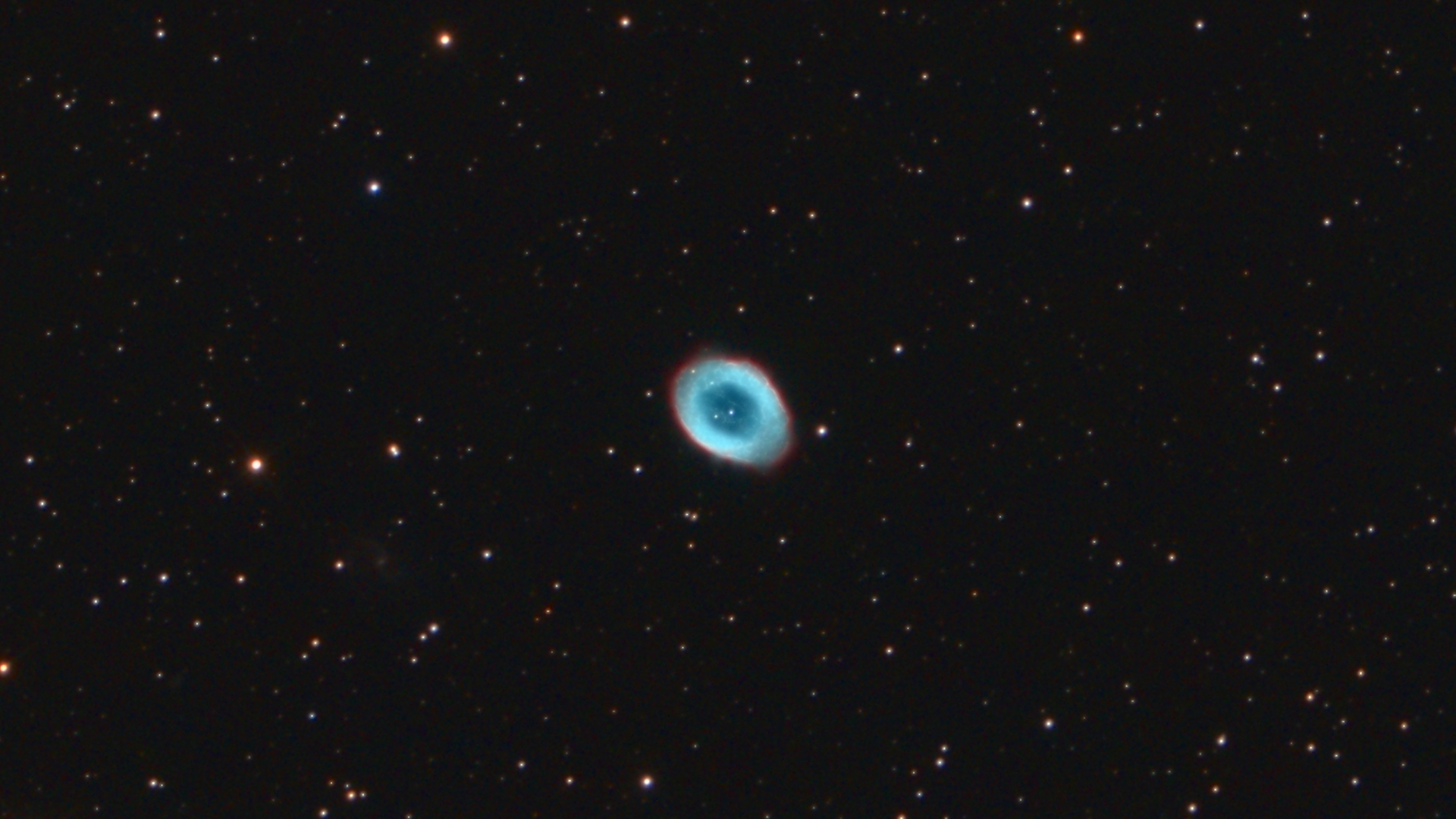 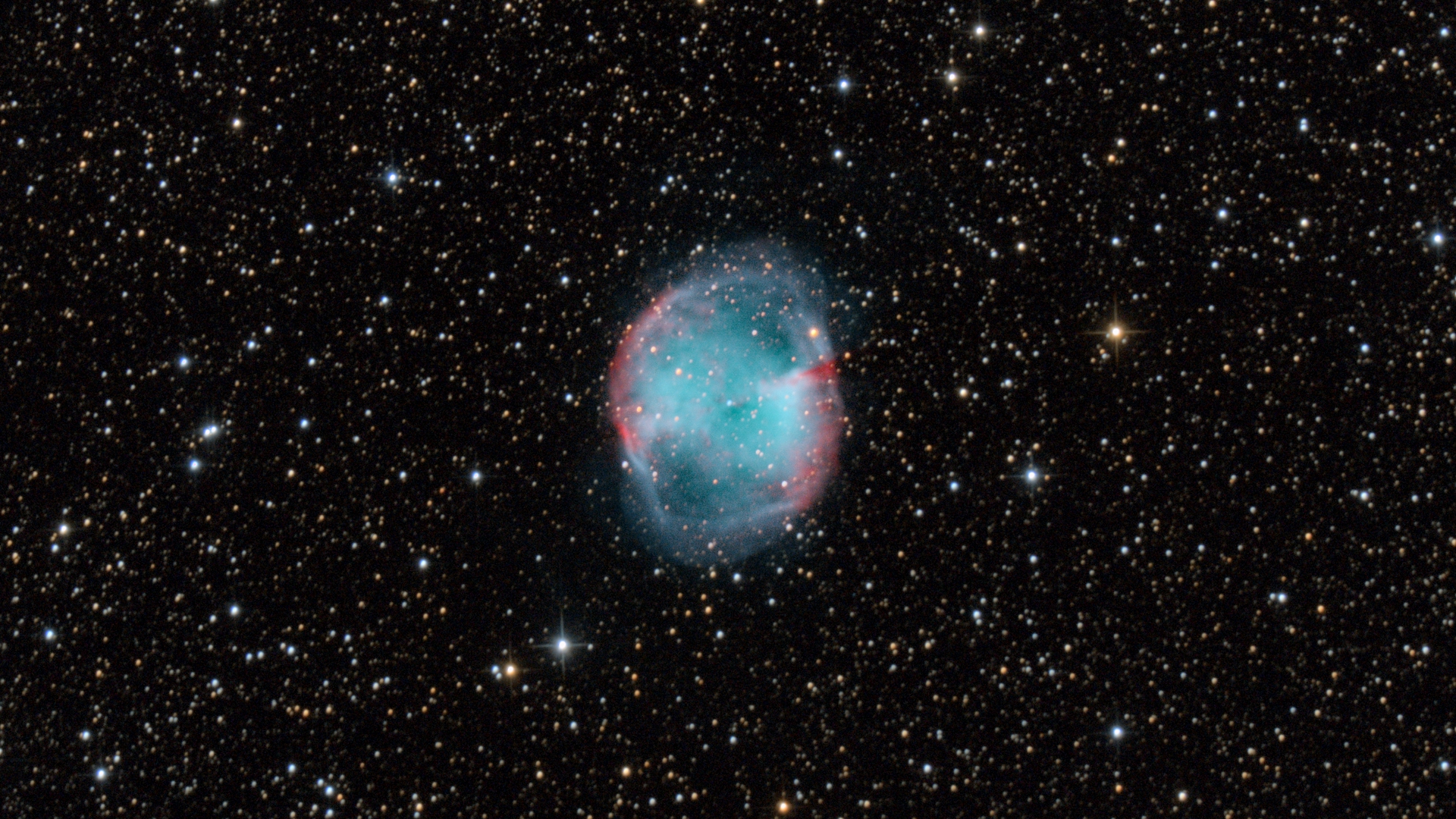 An unmodded camera is not totally blind at 656nm. As a rule of thumb removing the filter enhances the sensitivity by a factor of two or three depending on how the IR filter is designed. In photographic terms this is just 1 to 1.5 f-stops. There are plenty of bright Ha objects. Probably the most famous one in the northern hemisphere is the Great Orion Nebula. When imaged together with the nearby Running Man nebula an unmodded camera can even be superior because it dims the bright Orion Nebula down a bit so that the blueish running man appears brighter in the image. 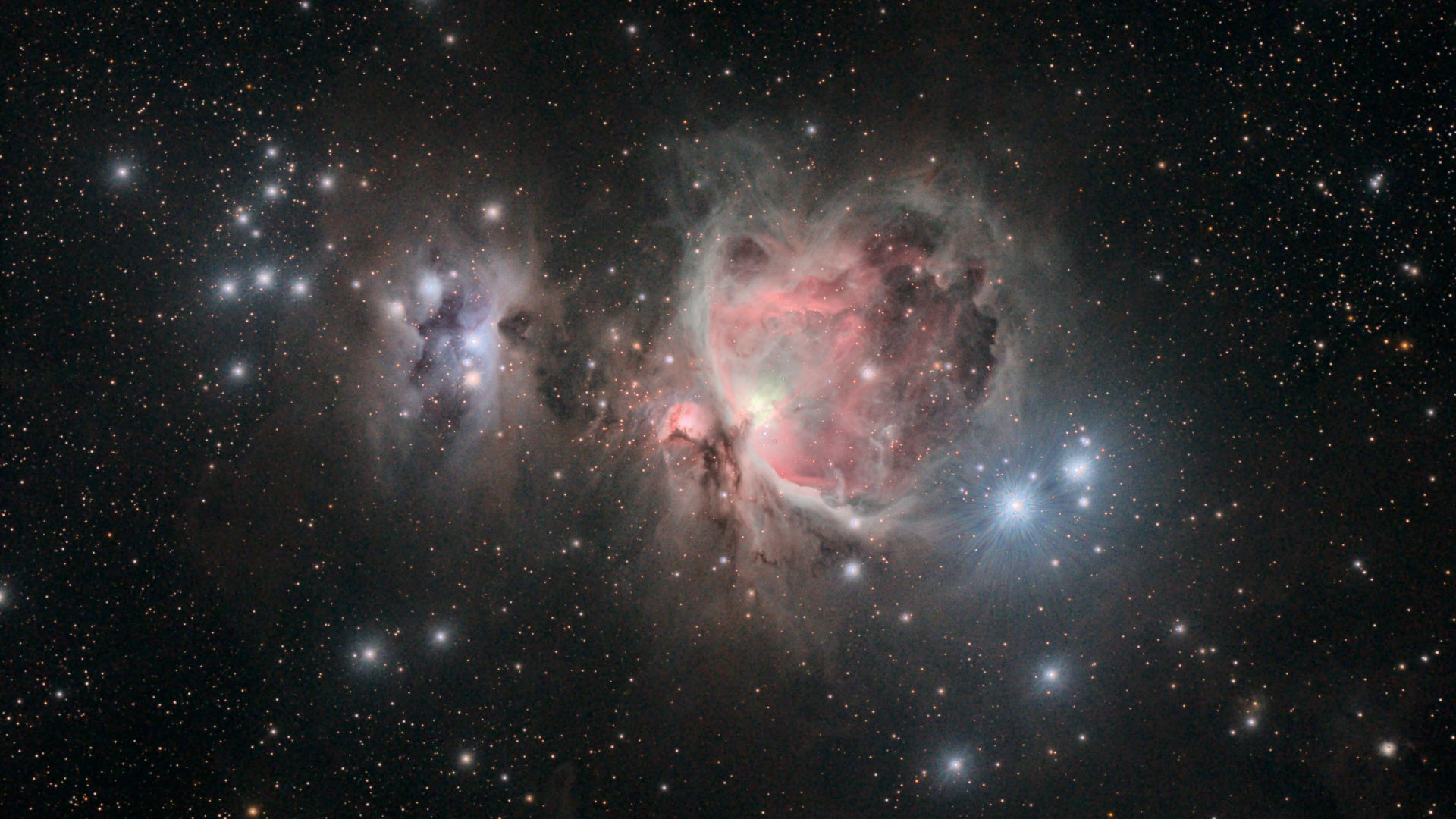 M42 and Running Man. Canon T7i, TS 65mm Imaging Star, f/6.5, 27x2min, ISO 400
open image
But this is by far not the only emission nebula suitable for unmodded cameras. The Trifid Nebula comprises a blue reflection nebula next to a red Ha emission area. 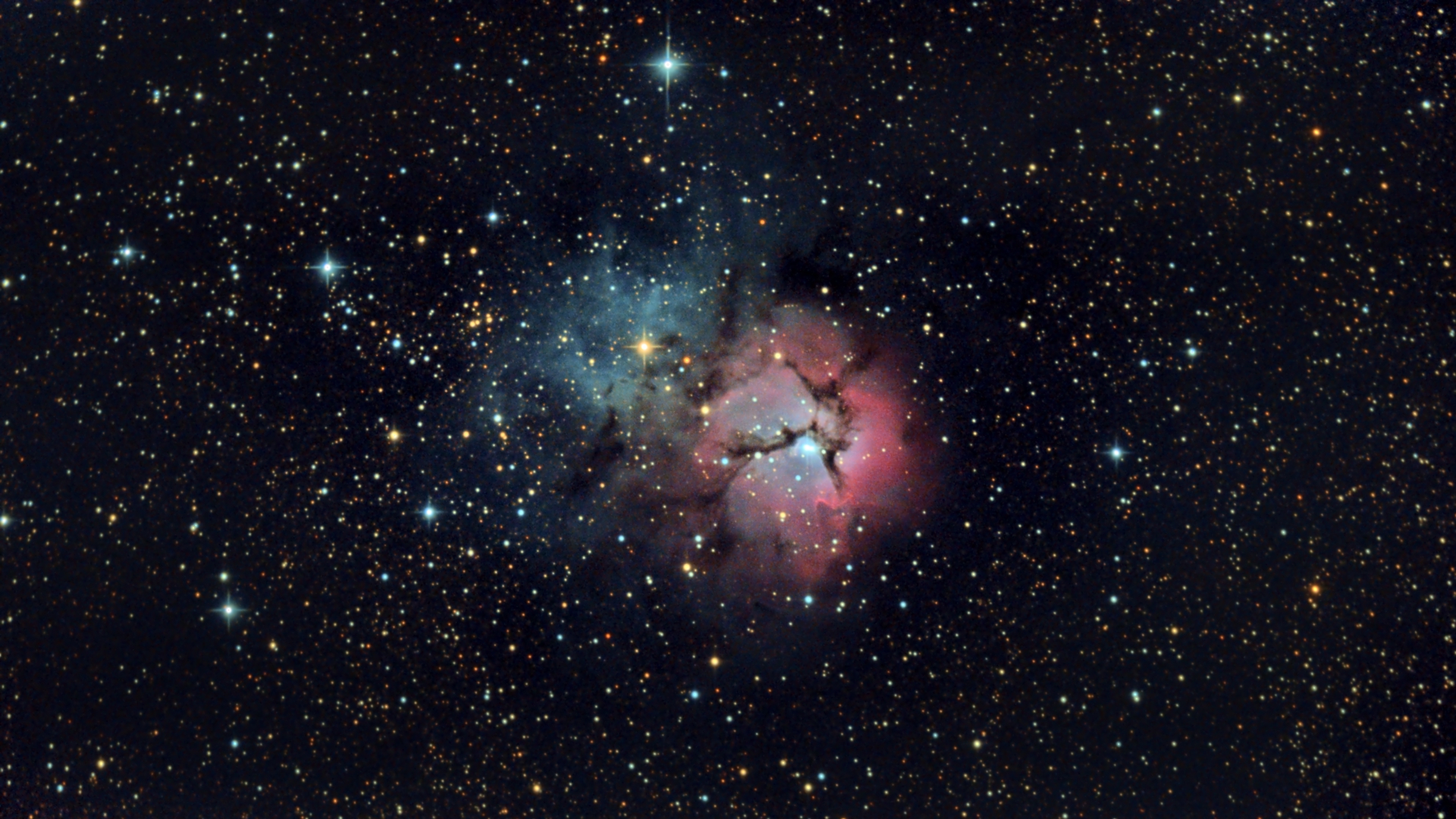 M20. Canon T7i, GSO RC8 at f/6, 29x4min, ISO 400
open image
Coming back to open clusters that may or may not be associated with an emission nebula. The Rosette nebula is famous example of a star cluster and a Nebula but not the only one. 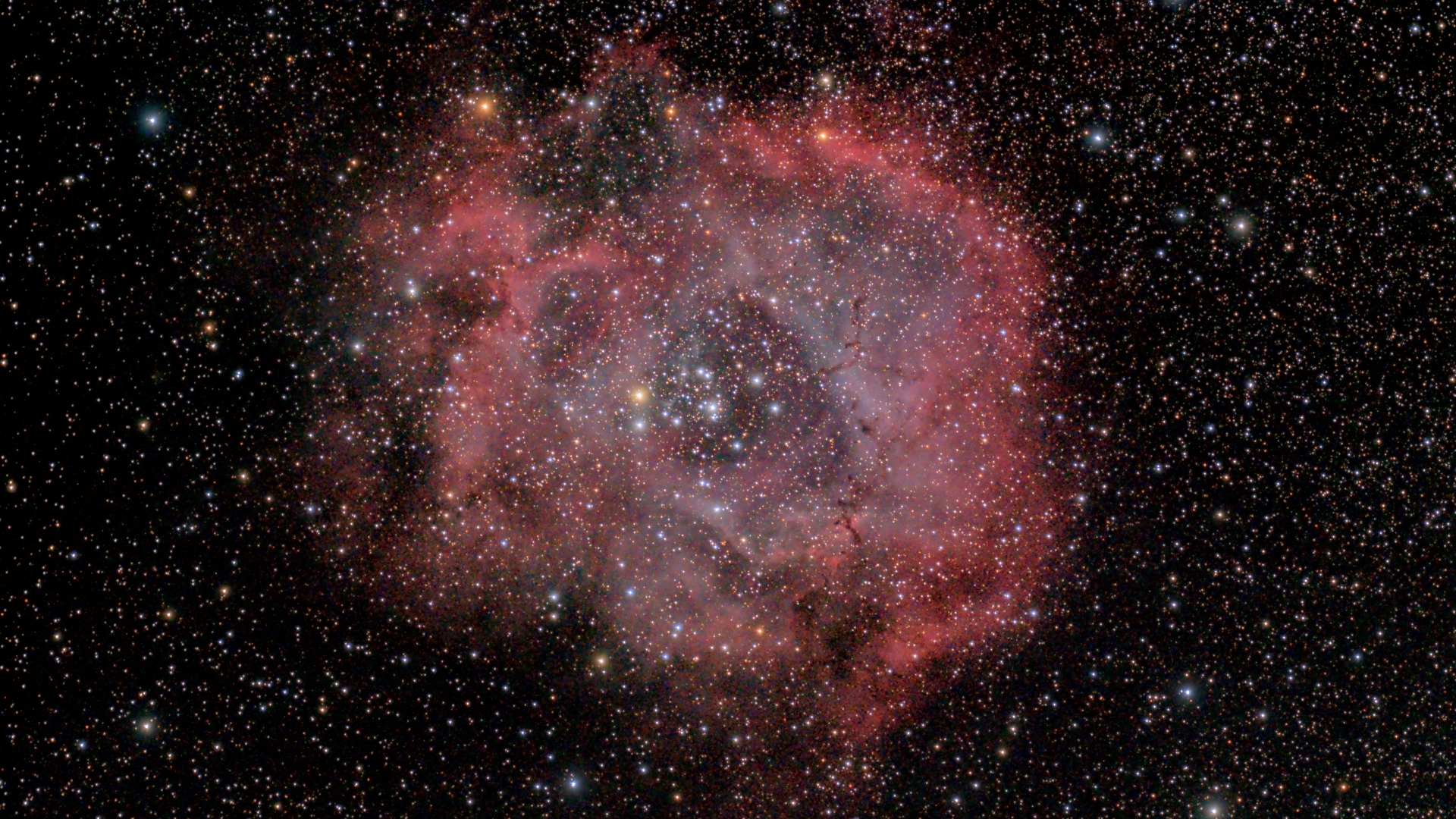 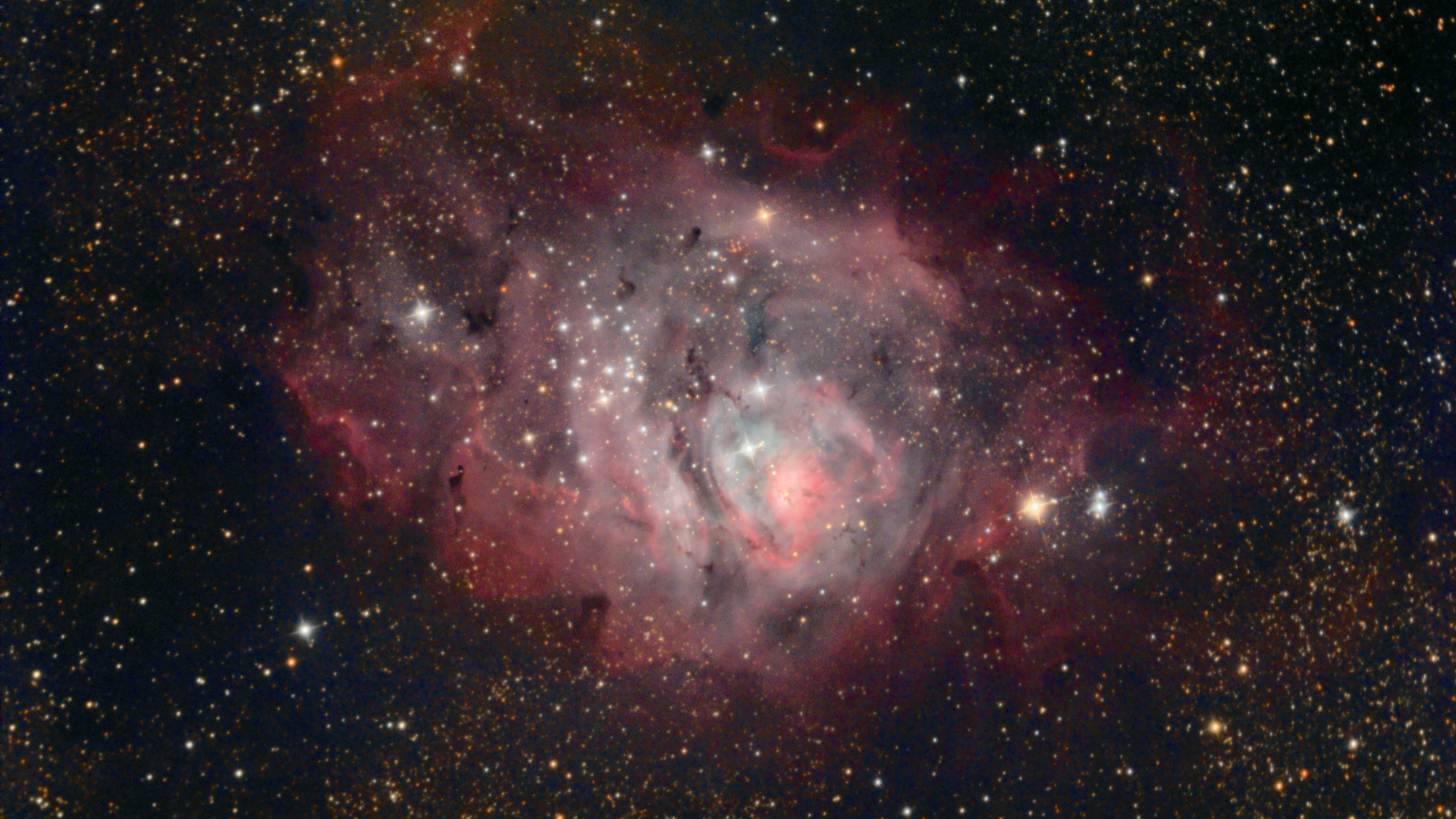 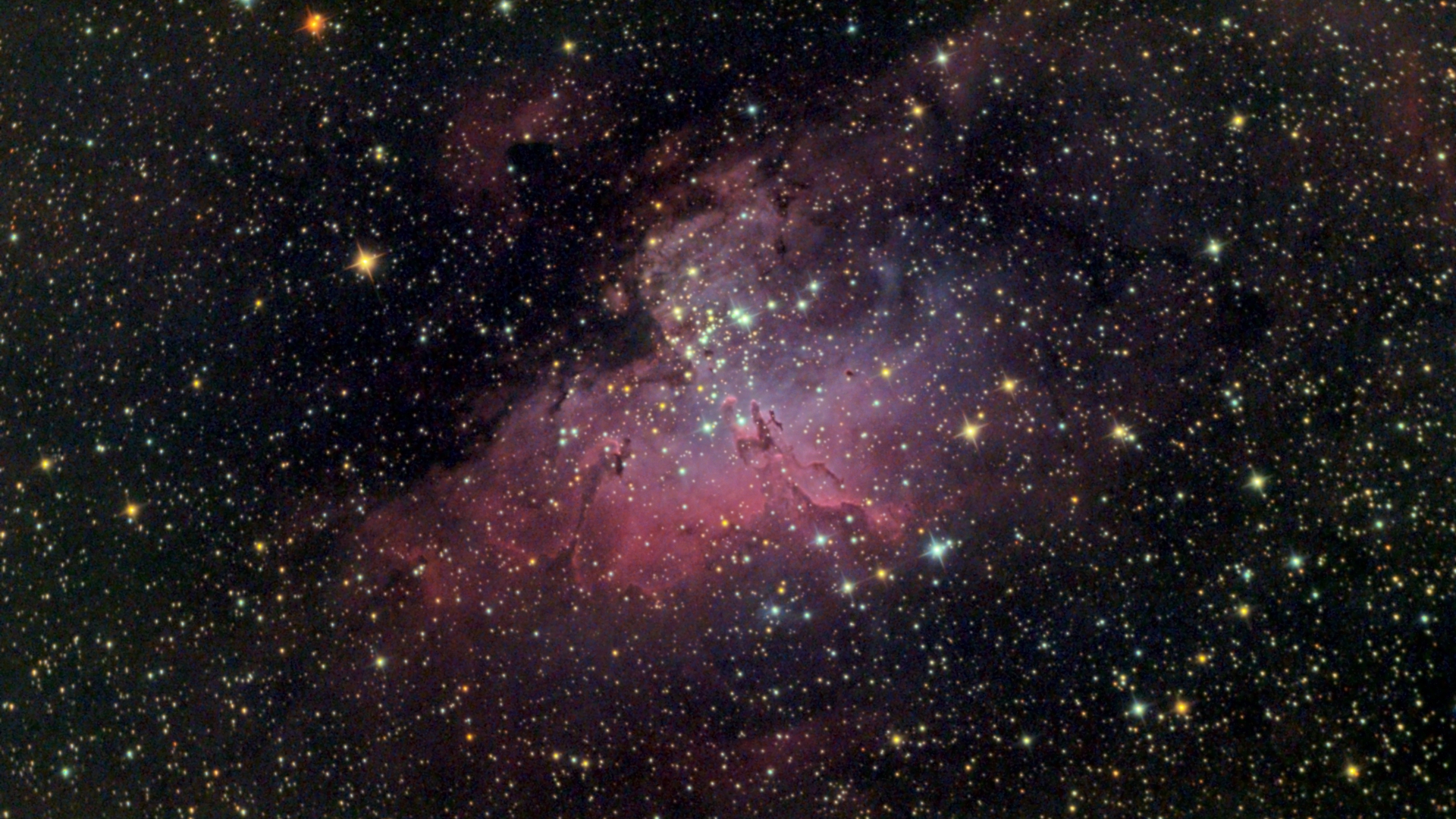 This group overlaps with the last one. All the objects shown in the last section are located in the Milky Way. I decided to put the next objects in a separate group because they are so large that the images are powdered by stars. You can easily find 20,000 stars and more in one image. The size of the object allows to shoot them with a moderate telephoto lens in case you do not own a telescope. Most beginners are troubled by the amount of stars that distract from the nebulae. When the stars are reduced in size during post processing the objects show up more clearly. 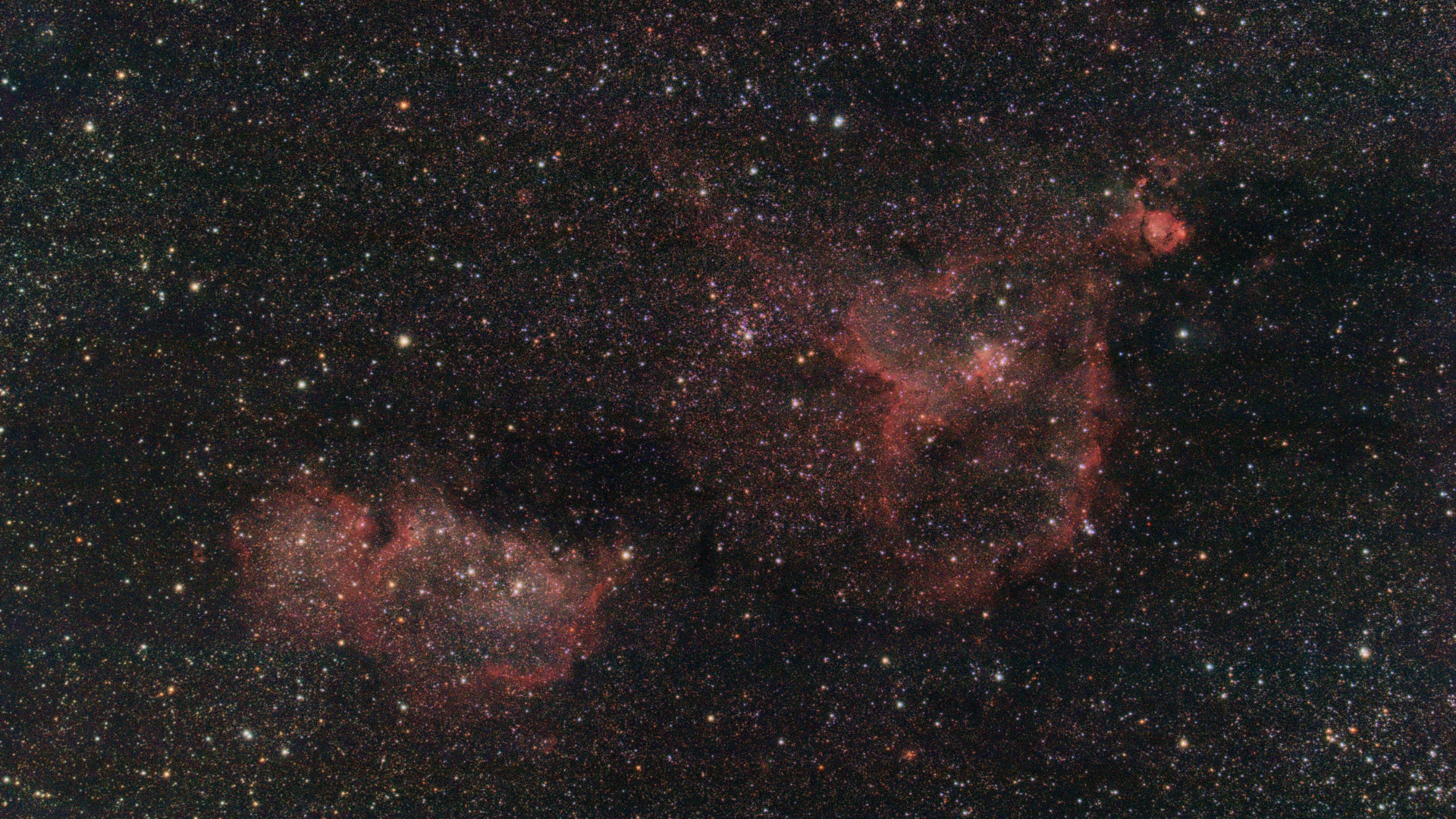 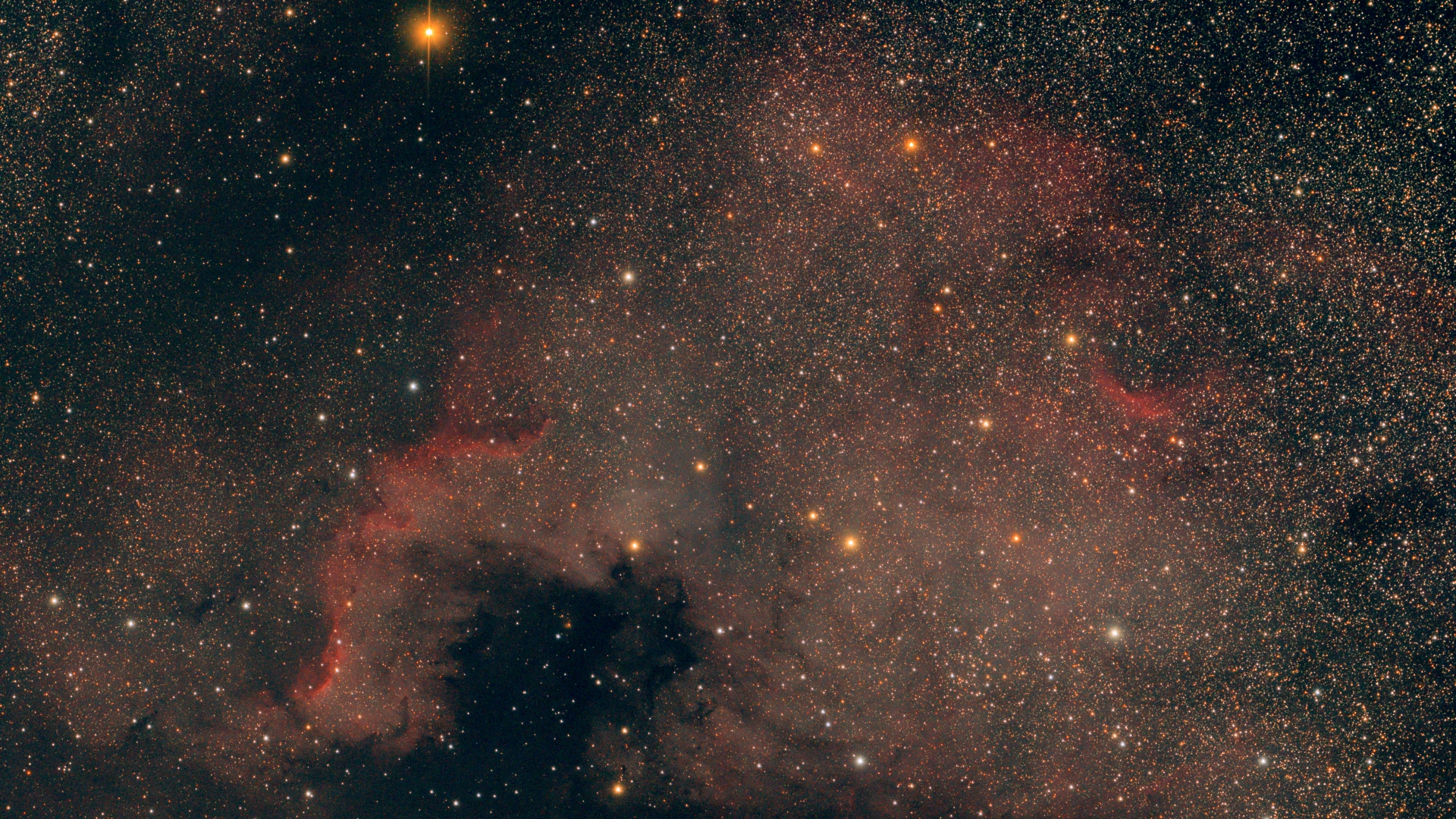 You can find many of these images the gallery. Many of them are composite images that contain Ha data from a mono camera. These have been reprocessed for this article without the use of Ha data. Of course there are more objects suitable for unmodded cameras like dark nebulae or planets but alas I do not have any image of those.

It is perfectly possible to take decent images of the night sky with an unmodified camera. If you don't want to modify your camera for whatever reason be encouraged to use it as it is!